Psychological Flexibility: The Superpower of Mental Health and Wellbeing

“Nothing is softer or more flexible than water, yet nothing can resist it.” – Lao Tzu

Many experts argue that psychological flexibility is the ‘super skill’ of resilience and mental health. Research has found that it is associated with improved quality of life and wellbeing, and is a primary determinant of mental health and behavioural effectiveness (Bond, et al. 2013).

In this post, we’ll explore what it is, the underlying theory it is built upon, and look at six ways you can increase your own psychological flexibility, so you can experience more wellbeing in day to day life.

What is Psychological Flexibility? 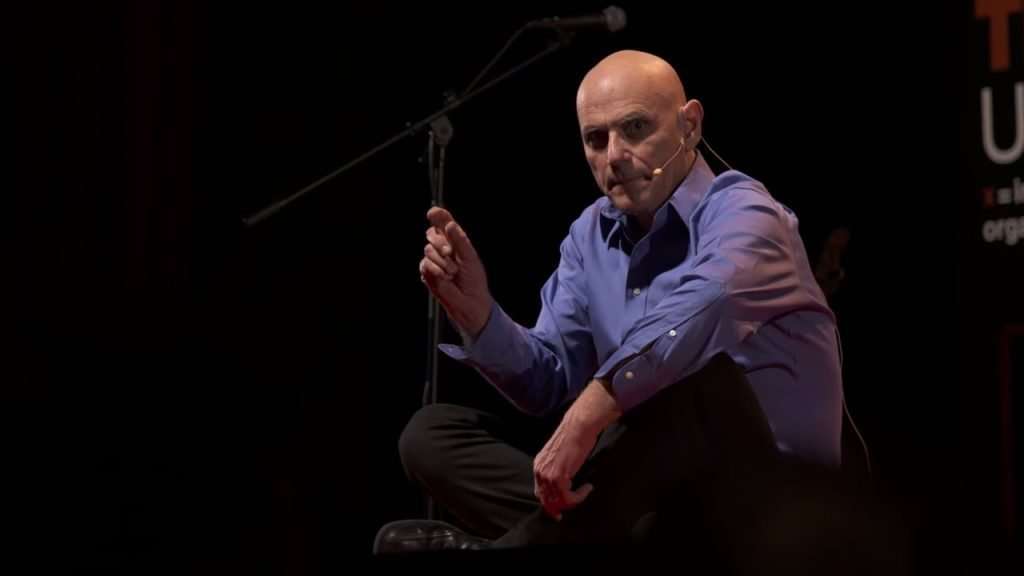 Professor Steven Hayes (the co-developer of Acceptance and Commitment Therapy) defines psychological flexibility as the ability to ‘make contact with experience in the present moment fully and without defence’.

Being psychologically flexible allows you to stay rooted in the present moment when difficult thoughts, feelings and sensations arise, and enables you to take a broader, more holistic view of the situation. Instead of basing your decisions and actions on the fluctuating thoughts and emotions of the moment, you can choose your response according to your deeply held values and your long term vision for your life.

Psychologically flexible people are skilled at taking on feedback and perspectives from others, and recognising when their approach to solving a problem needs to be changed. They know that by changing their actions, they are likely to get different results, so they are flexible in their approach to achieving what they want in life. They do not buy into rigid thinking, dogma or doing things a certain way simply because ‘that’s the way it’s always been done’. They are also characterised by being able to shift their perspective fluidly between the present moment and the future.

A good example of psychological flexibility in action comes from the story of how Wharton Professor Adam Grant improved his public speaking skills:

“When I was in grad school, a friend asked me to give a guest lecture for her class. I was terrified of public speaking, but I wanted to be helpful, so I agreed. I figured it would be a good learning opportunity, so after the class I handed out feedback forms asking how I could improve. It was brutal. One student wrote that I was so nervous I was causing the class to physically shake in their seats. My authentic self was not a fan of public speaking. But I started volunteering to give more lectures, knowing it was the only way to get better. I wasn’t being true to myself, I was being true to the self I wanted to become.”

Notice how Professor Grant did not base his actions on his thoughts or emotions at the time.

Instead, he took a course of action that, although emotionally challenging and painful, was based on his values (helping his friend and improving) and his long term vision for his life. Fast forward a few years, and Grant is one of the most prolific communicators in psychology, with his TED talks being viewed more than 20 million times.

What is it built upon? 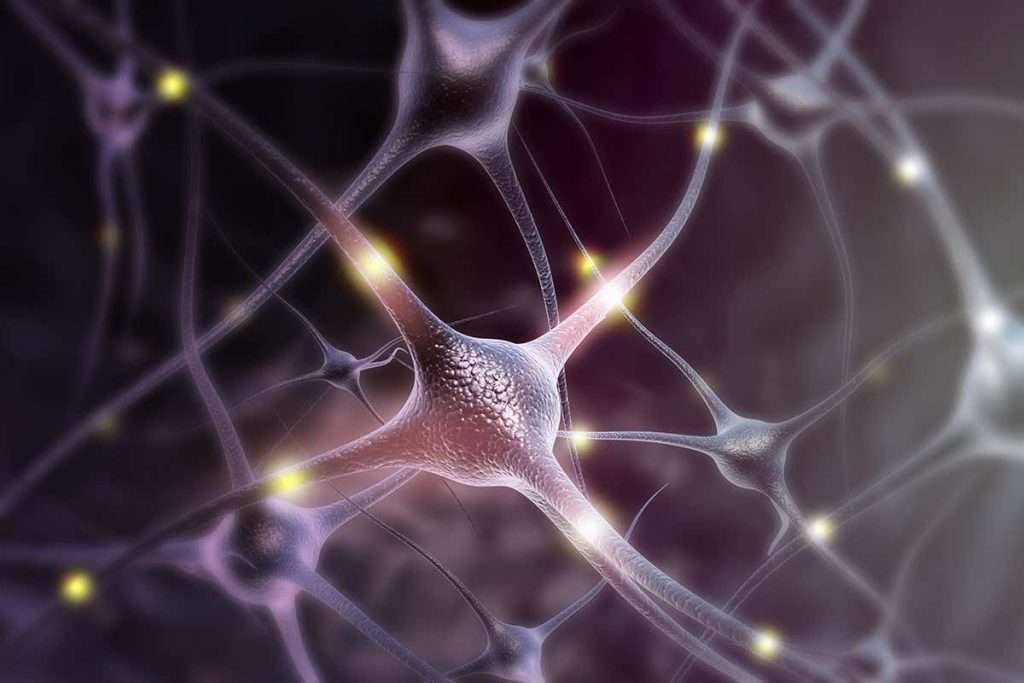 Psychological flexibility is based on Relational Frame Theory (RFT), which now has over one hundred and fifty peer reviewed articles supporting its principles.

In a nutshell, RFT suggests that human beings learn language in terms of relationships, and not just by association – as was previously thought. This means that when we learn something new, it is placed in a neural network in our minds, and is related to other, pre-existing ‘nodes’ in that network.

RFT is a complex theory, but the key point is – you can’t remove or ‘delete’ thoughts from a network once they have been put in there, as many approaches try to do. There’s no such thing as ‘unlearning’.

Doing so, is like trying to unweave a vast spider’s web of infinite connections.

In ‘A Liberated Mind’, Professor Hayes tells the story of how he used to suffer from panic attacks and the approach he used to treat his anxiety. He would listen to relaxation tapes that would get him to repeat things like: ‘I am calm and relaxed’ over and over again. Later, when he was in situations that made him feel on edge, he would repeat: ‘I am calm and relaxed’ to try and get rid of the anxiety and induce a more relaxed state of mind.

However, there was a problem: the phrase, ‘calm and relaxed’, had now become linked with anxiety and panic attacks in his brain.

They were in the same neural network…

Therefore, telling himself that he was ‘calm and relaxed’, led him to thinking about anxiety, which in turn provoked intense panic attacks.

Paradoxically, his attempts to soothe himself were leading to the problem he was trying to avoid.

This is actually quite a common phenomenon in psychology referred to as ‘Relaxation-Induced Anxiety’.

So, if the problem can’t be solved by attempting to ‘remove’ thoughts from our neural networks, what then can we do?

The key, Hayes argues, is that it’s not what we think or feel that counts.

It’s how we relate to what we think or feel that matters.

For instance, if psychologically flexible people feel anxious, they do not try and fight it or run from it – as they know it can aggravate the problem. Instead, they embrace that this is what they’re experiencing right now, acknowledge it, and choose their response to it with the bigger picture (vision, values, etc) in mind.

Thus, the feeling itself does not change, only their relationship to it.

As a result, feelings and thoughts have less power to dictate their behaviour and they gain more control over their lives.

How can you develop psychological flexibility?

Acceptance and Commitment Therapy (ACT) is a form of cognitive behavioural therapy which aims to help people live a rich, full and meaningful life, while accepting the pain and difficulties that will inevitably arise along the way.

ACT is existentially-informed and helps individuals get in touch with the ‘big picture’ and their core values in life. Questions like: ‘What do you want to be remembered for at your funeral?’ and ‘What do you really stand for’? are taken into consideration. These core values are then used to guide decision making, daily actions, and inspire behaviour change.

ACT involves six core therapeutic processes, which are designed to reduce psychological rigidity and help people develop psychological flexibility skills. Developers and practitioners of ACT such as Dr Russ Harris, PhD, stress that the six processes are interdependent and rely on each other.

“It’s more useful to think of them as six facets of one diamond. And the diamond itself is psychological flexibility.”

In other words, just focusing on one or two doesn’t work. If you want to develop psychological flexibility, the six core processes need to be practiced in tandem.

Let’s briefly look at each one…

As human beings, we have a tendency to spend a disproportionate amount of our time ruminating about the past or worrying about the future, and this often leads to a great deal of unnecessary suffering. In addition, many of us often find ourselves in ‘autopilot’ mode, which means we are unconsciously acting out pre-conditioned patterns from our past.

Contacting the present moment involves bringing your awareness out of these unconscious patterns, and into the here-and-now, so you can fully experience what is going on inside you (psychologically), and in the world around you.

Another unfortunate tendency of the human mind is to identify with our thoughts; to ‘fuse’ with them. We do this not realising that the thoughts in our head are merely words and images that we have picked up from the world around us.

As a result of being ‘fused’ with our thinking, we take the words and symbols that are bouncing around our minds too seriously, and this can get us into trouble. For example, if you have an overly negative ‘inner critic’ that is constantly telling you that you’re no good, then this can have detrimental effects on your mental health and wellbeing.

Defusion enables you to create some distance between your awareness and your thoughts, so that you take them lightly and don’t get caught up in their craziness. Therefore, when a thought pops up (good or bad), you can watch it come and go, rather than getting sucked into a cognitive vortex that takes you on a wild goose around the infinite networks of your mind.

Acceptance is the ability to open up to the difficult thoughts, feelings and emotions that arise within you. Instead of trying to fight them, or run away from them (which often does more harm than good), they are allowed to be as they are and given some breathing space.

Paradoxically, when you accept these ‘negative’ experiences, you take their power away.

ACT divides the mind into two distinct elements: the thinking self and the observing self.

The thinking self is the part of us involved with planning, solving problems, judging, fantasizing, etc.

The observing self is you as ‘pure awareness’. This is the part of you that is aware of your thoughts, feelings and actions in any given moment. It is the ‘you’ that’s been there your whole life. Think about it this way: as you pass through life, going from a toddler, to a child, to a teenager, to an adult, to an elderly person, your body will change, your thoughts will change, and your roles will change, but there is an aspect of you (an observing self) that remains constant throughout.

According to ACT, the more you can take the perspective of the observing self, the more psychologically flexible you will be.

Harris (2009) defines values as ‘desired qualities of ongoing action’. In other words, your values are your chosen life directions that describe how you want to act in the world on an ongoing basis. They can usually be expressed using verbs and adverbs, such as: giving gratefully, listening empathically, living courageously, etc.

According to the ACT model, getting clear on your values is vital for living a meaningful life.  It’s all about identifying what is most important to you, and then using that knowledge to guide you in day to day life.

The following questions can be helpful for clarifying values:

In short, values are like a compass that point to your true north, giving you direction and providing guidance for daily action.

6. Committed Action (Do What It Takes)

A compass is no good if you stay at home and stare at it all day.

As the name suggests, committed action refers to embodying our values with integrity and acting them out in day to day life; even if it is painful, inconvenient or uncomfortable to do so. Living in alignment with your values may involve saying no to things and is unlikely to win you approval in the short term.

For example, we recently invited a speaker to give a talk at our monthly online conference, and offered him a generous deal for doing so. Although part of him wanted to give the presentation, he said no because it was a value for him to keep Sundays work-free so he could spend time with his family. 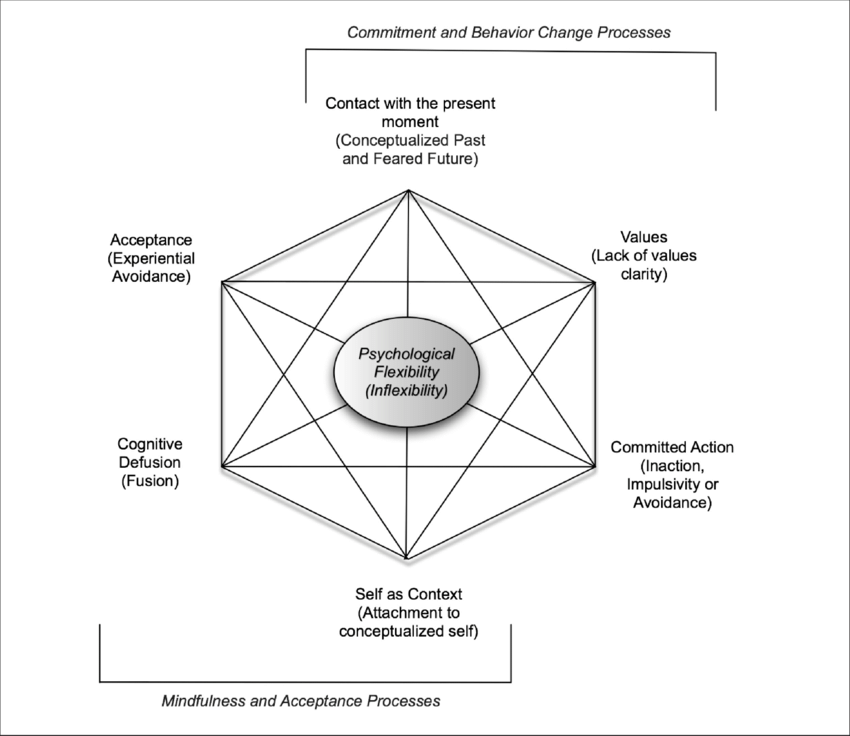 Although the six core processes have been discussed here separately, it’s important to keep in mind that they do not exist in isolation.

As Dr Harriss states, it is most helpful to think of them as six facets of a ‘psychological flexibility diamond’ that are interdependent and to be practiced in tandem with one another. For instance, you can’t take committed action (6), unless you are clear on your values (5), and it is difficult to practice defusion (2), unless you are able to contact the present moment (1).

If you are interested in discovering how psychologically flexible you are, you can take an assessment on Professor Steven Hayes website by clicking here.